To Change Something: The Work of Lea Feinstein 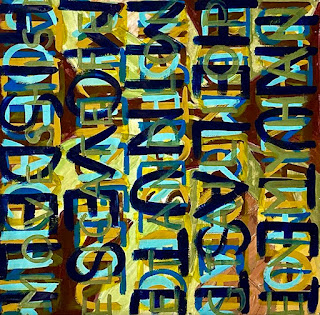 In her studio, surrounded by the work for her upcoming solo show, Lea Feinstein is immersed in the visceral, visual rhythms of letterforms. Her head is filled with lines of poetry committed to memory, both in her own words, and in those written by friends, family, and literary figures. These fragments of verse are the focus of a new series of expressionistic text-based paintings made for her exhibition, Pages, at Keystone Gallery. Using earlier work made on Tyvek as a substrate for her current paintings, Feinstein superimposes phrases in a simultaneous act of destruction and creation.

Feinstein’s new paintings are a sort of personal reckoning between the past and present. While recently taking stock of her work, she impulsively decided to quit the diaphanous paintings of larger-than-life succulents that she had been working on for the past five years, ever since moving to Los Angeles from Palo Alto. Lacking the enthusiasm to continue painting succulents, she pivoted and returned to content she was intimately familiar with and always passionate about: the written word. If there is a manic quality to her studio practice now, perhaps it is  because she feels a sense of urgency, not only to express herself in this moment, but to synthesize all of her previous artistic endeavors into a new form.

Her process is a psychological journey plumbed and shaped by words through the act of painting. The colors of the underlying paintings and the choice of poems determine her initial direction. Soon enough, the shapes of the letters themselves suggest imagery and bring layered meanings to mind. Words are physically layered upon each other in bold, indelicate lettering and strong colors, creating intentional and accidental associations that seep up and rise to the surface. To further emphasize this notion of layering, she displays several paintings on top of each other; sheaves of Tyvek are pinned to the wall and build up meanings like pages of a book.

Just as her work is physically built upon a foundation from the past, it is also shaped by her lived experiences as an artist, educator and mother. While raising three sons, running a household and making her own art, her early text works made between 1985-1994 were often rooted in feminist content and form, along with ideas related to the Fluxus movement of the sixties and seventies. In the mid-nineties, Feinstein performed Laundry Line at Towson University in Maryland. She strung up undergarments printed with phrases lifted from Rumpelstiltskin, emphasizing and exposing patriarchal tropes in familiar fairy tales. In 2011, her installation of the same name was exhibited in San Francisco in Literati, and was recently included in Dream House, a publication edited by Cindy Rehm, honoring the 50th anniversary of Womanhouse.

At the same time that she was exploring feminism through performances during her years teaching at the Maryland Institute College of Art, she made other text-based works. Bra Stories is an accordion-style book that relates a coming-of-age story through intimate clothing. In an early text experiment from 1989, Feinstein repeatedly photocopied a cash register receipt of cleaning products onto clear acetate sheets. The dot-matrix printer continually degraded the type, making the words illegible. Stacked, the imagery is abstract and the original receipt is obscured, but it created, as Feinstein recalled, “a sedimentary architecture, rising up.”

Fast forward to her current work and we find her building up surfaces again, but this time transforming words with paint. There is more physicality to the surface of her paintings than previous text-based works allowed, yet at the same time, the words are inscrutable, oftentimes flipped upside down to make them illegible so that they can only be read as shapes. Since the viewer doesn’t have immediate access to the source material, the experience is limited to formal aspects of the text. Feinstein’s emotional reactions and associations expressed through paint are the conduits that convey meaning and ultimately supplant the poems.

Nowadays themes of death and rebirth recur in different guises throughout her work. Some days she finds herself reciting favorite stanzas and puts those to paper, only later to understand their significance to her present life, as in the case of Cockle, and several of her smaller paintings on panel: Mercy, Wasabi, and Camping. Feinstein created the paintings after she found herself singing some of Ophelia’s mournful songs from Hamlet, including the phrase “He is dead and gone”. Afterwards, in an experience she claims was a type of exorcism, she realized the paintings were a lament for her brother, who had recently died. She has also used two poems by Nan Cohen, a friend and published poet who lives in Los Angeles. They met while Cohen was a Stegner fellow at Stanford and Feinstein enrolled in her poetry class. In Pages there are two paintings that are derived from Cohen’s poems, Loss, and Grow. Feinstein and Cohen investigate the same themes from their separate vantage points, with one focusing more on the visual aspects of the words, and the other concerned with the sounds they create.

Forged by poetry and enriched by her past, Feinstein is turning a page as she navigates her future and embraces change. The breadth of her creative life has included bookmaking, performances, installations, paintings, sculptures, art criticism, and poetry. It is informed not only by the arts, but also by meaningful connections with family and friends. Through it all, Feinstein remains consistently optimistic. In Pages, the words she writes may be illegible, but the urge to communicate is vivid and passionate.