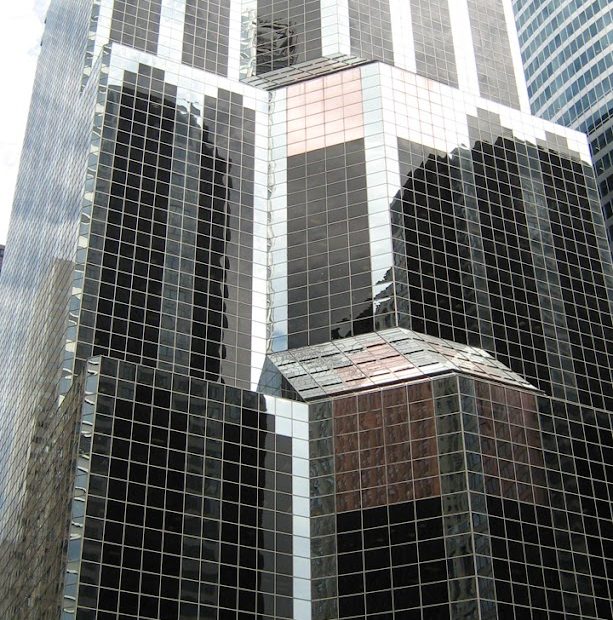 When I was an art student in Chicago, I lived near downtown for a while in a blighted, industrial neighborhood.  I rented a cheap, neglected storefront that I discovered was the former home of the “Boom Boom Social Club”. It came furnished with a 2-man shoeshine stand, twenty phone jacks and boxes of short pencils used for off-track betting. I loved it.  The surrounding area was still undeveloped then and I could explore weed-choked railroad yards, seldom-used bridges and tributaries of the Chicago River flanked by old warehouses.  However, the economic tide was turning and soon the empty spaces were being fleshed out with new, overly ambitious buildings, anticipating the corporate flush of the Reagan years. The silhouette of the skyline was rapidly changing, and not always for the better.  Like the Sears Tower that preceded them, these buildings spoke to their wealth and status in a very muscular vernacular that was more like monuments to the architects themselves.

Around the same time, everywhere you went, headlines were screaming from newsstands: “Who Shot J.R.?”  The success of this stunt was phenomenal and the convergence of a mass marketing campaign and a plot surrounding the take down of a powerful icon, gave me an idea. I fantasized about devising a campaign too, but rather than speculate about the fate of television characters, I wanted to call attention to a lot of the awful architecture that was reshaping the city.  I imagined an intervention to “out” newly constructed architecture by posting grades onto their facades, a sort of scarlet letter for architectural offenses. I never did it, but I guess the impulse remains.  I think I felt motivated because buildings can last for such a long time and like your neighbor’s wind chimes, they are something you have to live with whether you choose to or not.

Now I live in Eagle Rock. Every few mornings I walk briskly around my neighborhood for exercise and each evening I go out again with my dog at a much more leisurely pace.  Over the past 5 years and the many miles that I have walked around the neighborhood, I have encountered coyotes, bobcats, trees under assault from bark beetles, and newly landscaped yards generated by city rebates.  I pass neighbors walking their dogs, young parents pushing strollers and all too frequently, older men and women hobbling along under doctor orders as they recuperate from unknown injuries.  All in all, it is a very genteel community.

The architectural styles here vary from block to block and even house to house. Among the few mansions and small apartment complexes you will find hundreds of well-preserved craftmans, Spanish colonials, English Tudors and a few mid-century houses. Some blocks  look like a preserved sampler of 20th century life and most homeowners have done thoughtful restorations. Lately however, I have watched as several charming bungalows were knocked down for the construction of bland and bigger homes in their place. With a depressing regularity, too many houses are falling victim to the American appetite for all things large and new. The teardown starts innocuously enough. First comes the dismantling of the wood siding, at which point there is still hope that the owners are replacing termite-damage.  But then the deconstruction accelerates and soon a chain link fence surrounds the property.  I imagine the homes on either side cringing in anticipation of the behemoth that will inevitably replace the modest wood house. A familiar helpless feeling overtakes me.   I can guarantee that the new two-story house will take up almost the entire lot. The garage will be prominently placed up front attached to the house and all the windows and doors, including the garage door, will be stock items from a home improvement store.  Sometimes there are architectural details that seem to poke fun at architectural details, like a partial outline of a peaked roof; a postmodern gesture towards the house it has subsumed. The last injustice will be a coat of stucco in the requisite pastel pink or beige, looking more like a new commercial space than someone’s house. It seems incredibly shortsighted to underestimate and squander the very things that make this neighborhood great.

This is not just endemic to Eagle Rock.  I see it everywhere and its been going on for a long time.  I really don’t begrudge anyone building his or her dream home but often, these new houses destroy the character of a community.  The scale is out of proportion to not only the property but to the surrounding homes.  The designs lack any unique features or personality. The underlying motive for these thoughtless renovations are to squeeze the most real estate onto a small lot as cheaply as possible. Why?  It is not impossible to build a larger house without destroying the character of the neighborhood.  I think we have a responsibility to keep the integrity of the street and “Enough, already!” with the bigness.  I’ve seen examples of thoughtful renovations whereby the homeowners improve their property and the neighborhood at the same time. But not every homeowner is interested in architecture or design.  Many people just want a big house.  I don’t object to large houses or any particularly style or mix of styles. Even high-density housing is appropriate in places. I only wish that we could restrict the size of new homes to an appropriate, livable scale in relationship to the size of their property and in context to the neighboring houses and street.  After all, it affects our quality of life. Architecture is just one factor that contributes to the appearance and livability of our neighborhoods but it is a large part of what we think of when we compare one community to the next. I have tremendous respect for those architects who create elegant, functional structures and have the tenacity to work with clients, budgets and building commissions.  I think of the great responsibility architects have towards the public as well as to their clients. My creative ambitions are very small by comparison.  I prefer to work in my studio rather than in public. I like the privacy of my solitude without external forces coming to bear on my decisions and I certainly don’t want to ask for permission to execute my ideas. My independence allows me to remain focused internally on the process of exploration and expression but it has its limitations too.  Working alone can be, well, lonely, and it is an effort to find an audience, let alone create a dialogue.
There are many artists these days whose creative practice is more akin to the process of architecture than to traditional studio arts.  These artists use objects and crafts as a means to affect social change rather than as a means unto themselves. Programs that encourage activism are proliferating not just in art schools, but at universities and across many disciplines as well. I find it intriguing because it is completely antithetical to the way I think. For me, I find that writing is a more preferable method of engaging with the world for change; writing has become my social practice. So when I ask myself why I find the building in my neighborhood so disturbing, my impulse is to write about it.
We all exist within communities. Some of the communities are of our own making and some are based on our culture or neighborhood.  Some are real and others are virtual.  In each community we have responsibilities and sometimes that means limiting the size of our house and respecting the environment, natural or man made.   I have noticed some of the same concerns from Chicago friends about the “tear-down” phenomenon. How do you feel about the changes in your neighborhood?* Where would you draw the line between responsibility and freedom?
*Your response and photo submissions are welcome!  If you send me a photo, with your permission, I will post it to my new Instagram account, #bad_architecture.  My intent is not to shame any homeowner.  “Bad” is meant primarily in the context of appropriateness and the values of our communities rather than personal taste. I look forward to your comments too. You can post below. Thanks!
photo credits:  Willis Tower/SOM, One Magnificent Mile/skyscrapercenter.com, One South Wacker Drive/ Wikimedia.org  All other photos by Lorraine Heitzman